Violinist
“Swaggering, heroic, and full of personality.”
The Strad, 2019 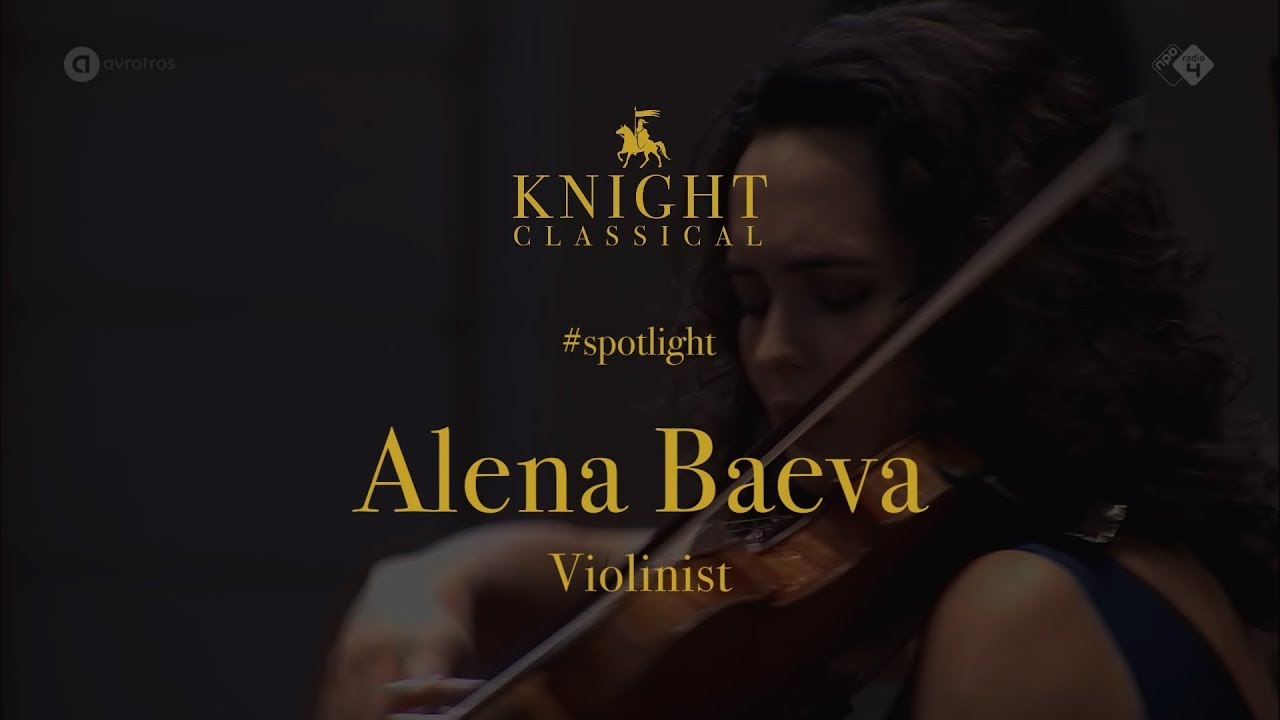 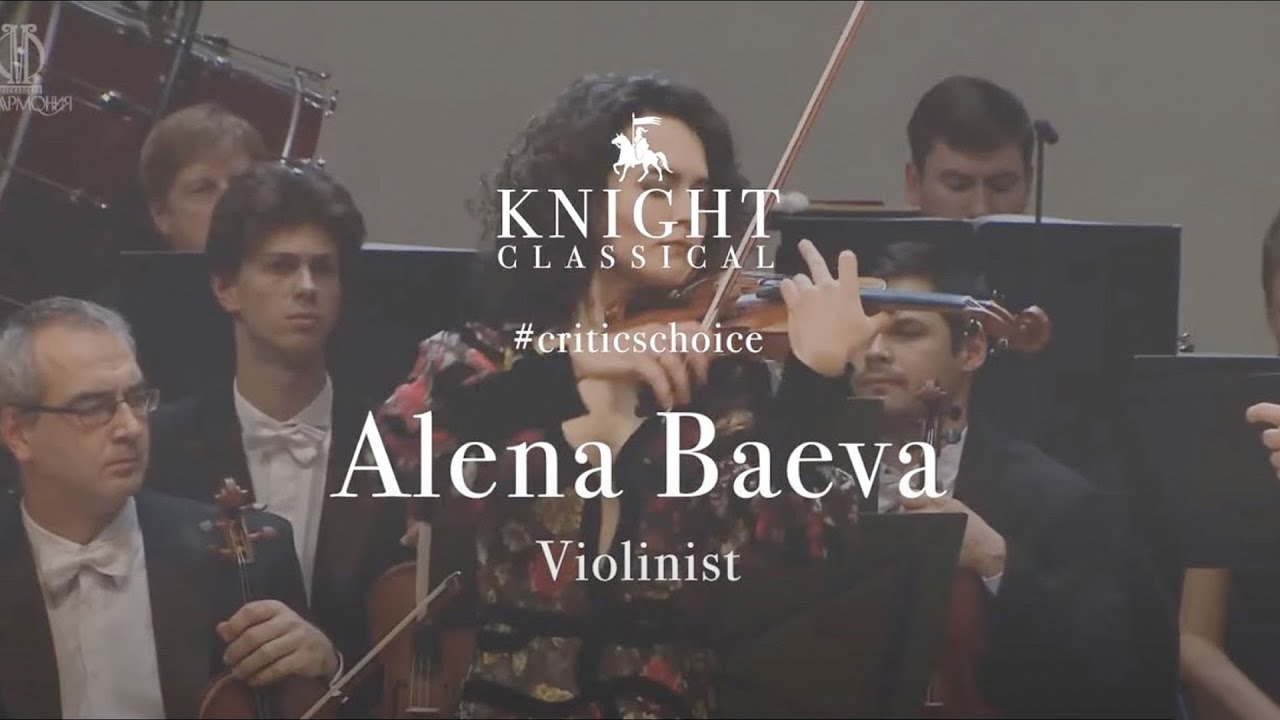 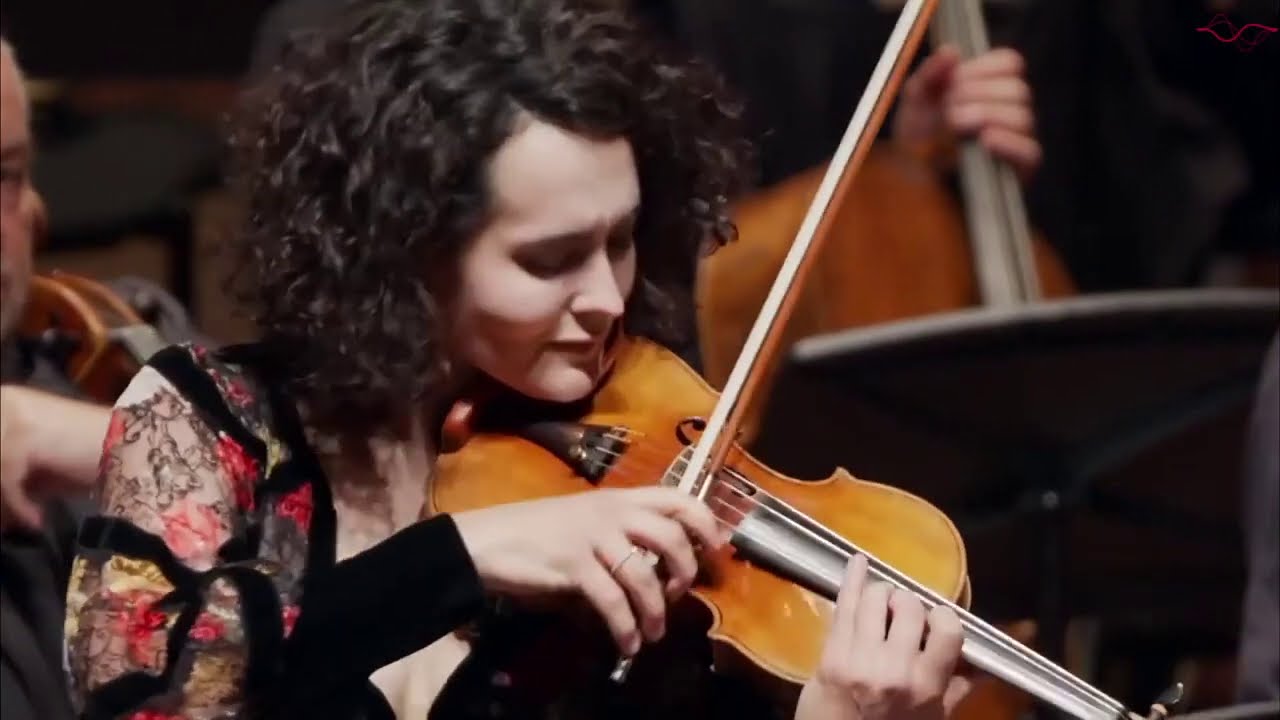 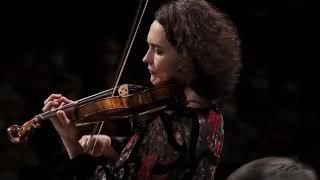 Mark Simpson – An Essay of Love 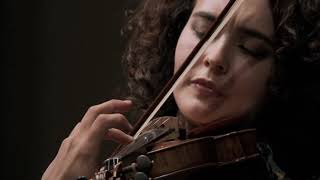 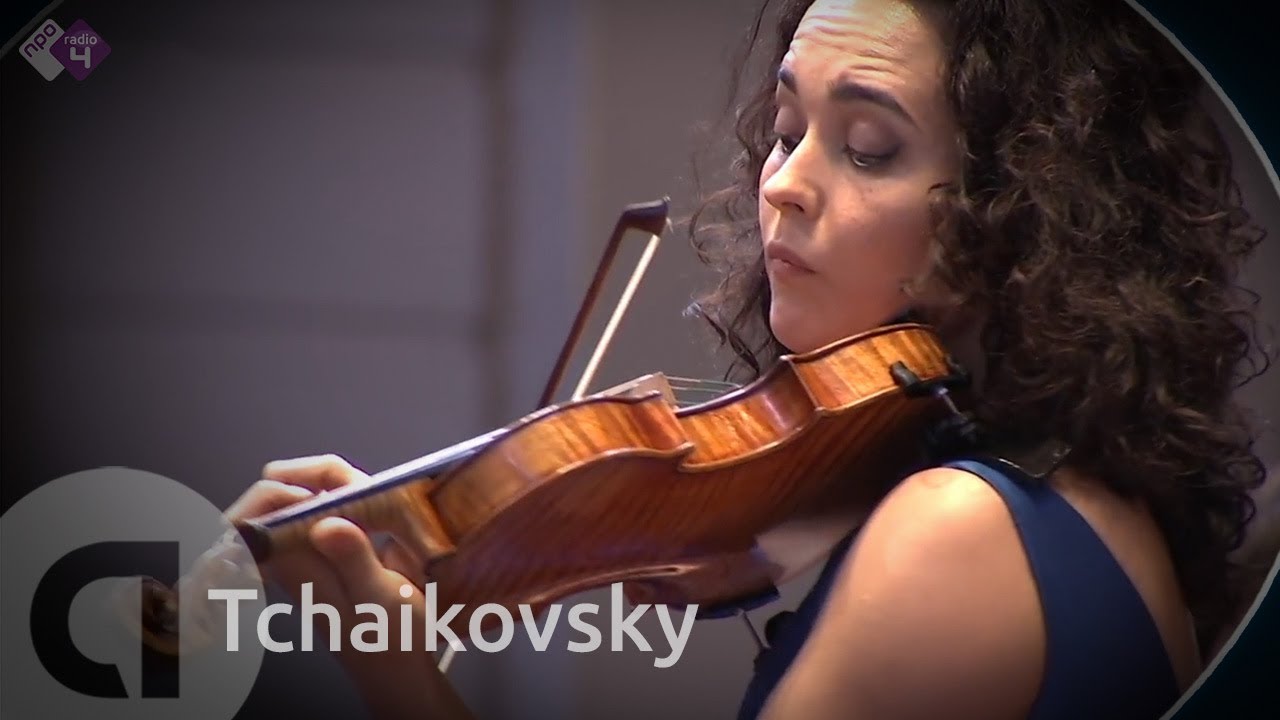 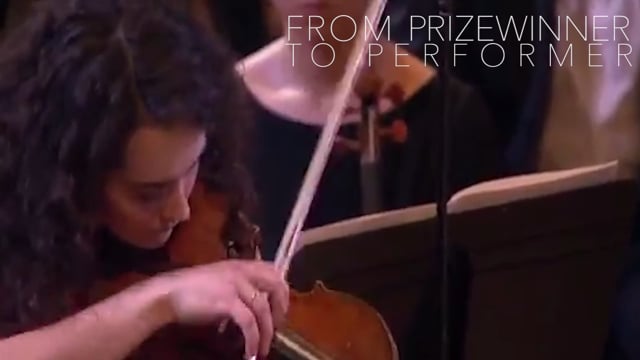 From Prizewinner to Performer 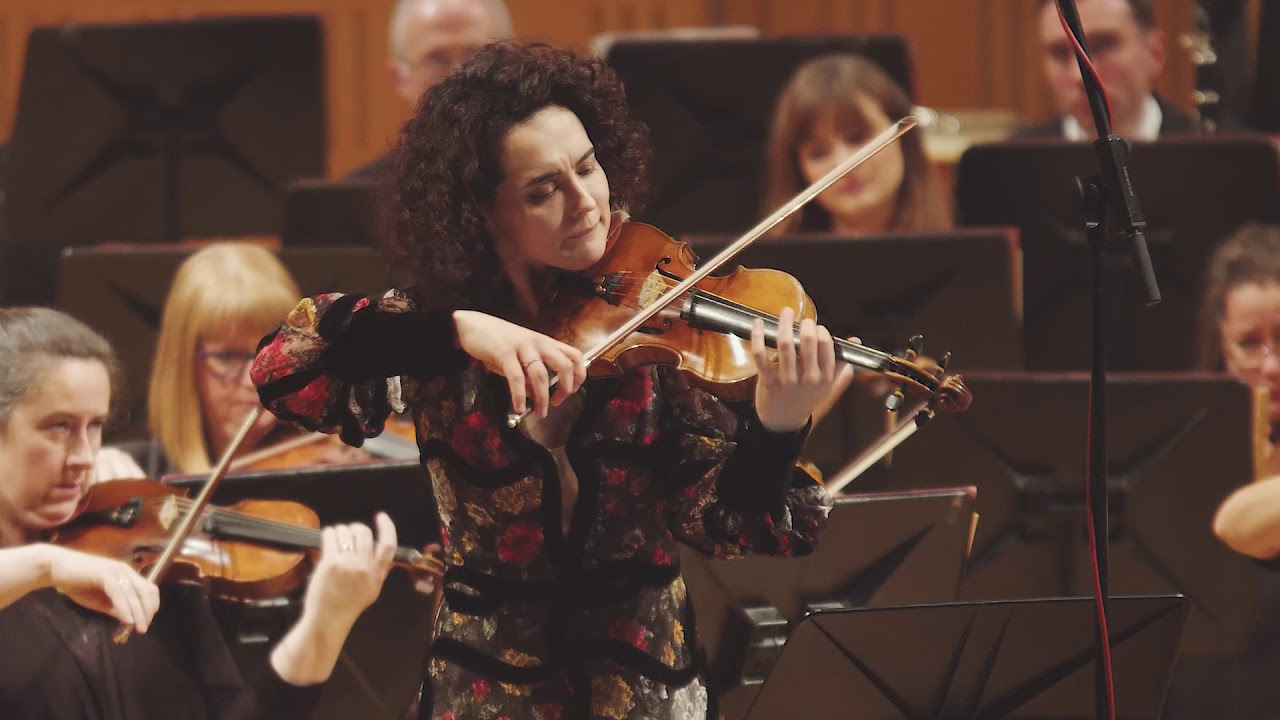 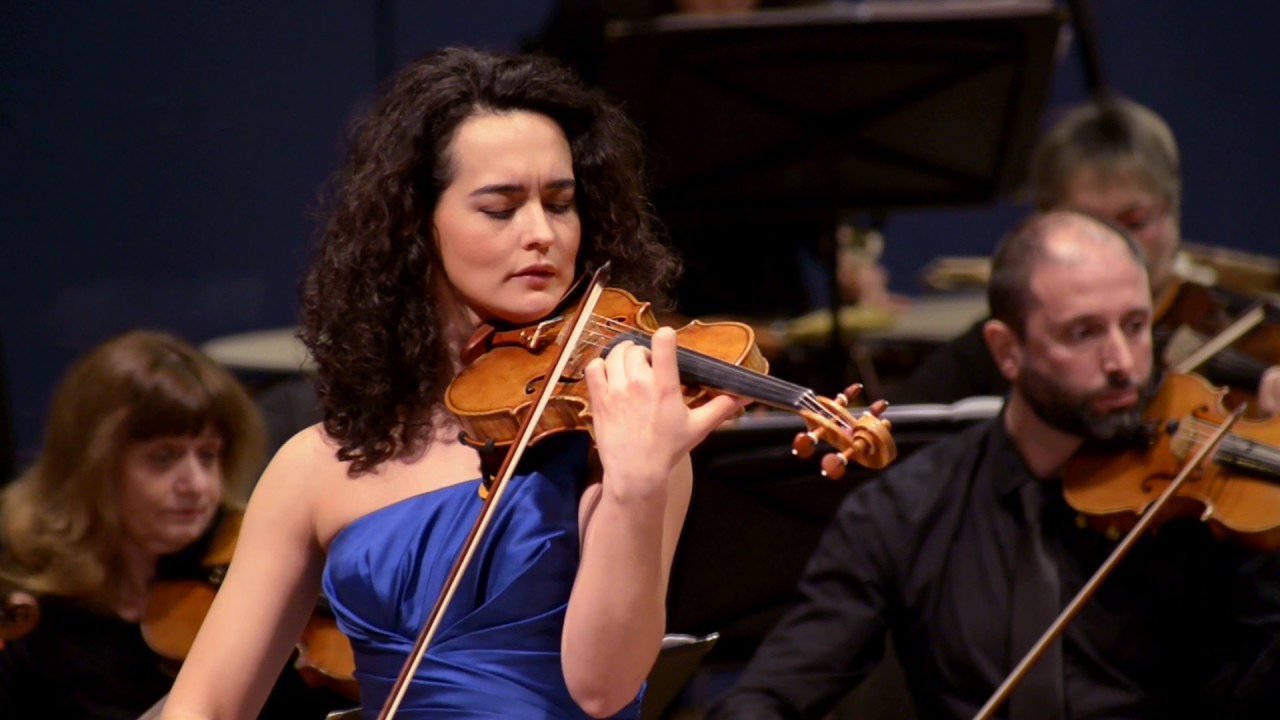 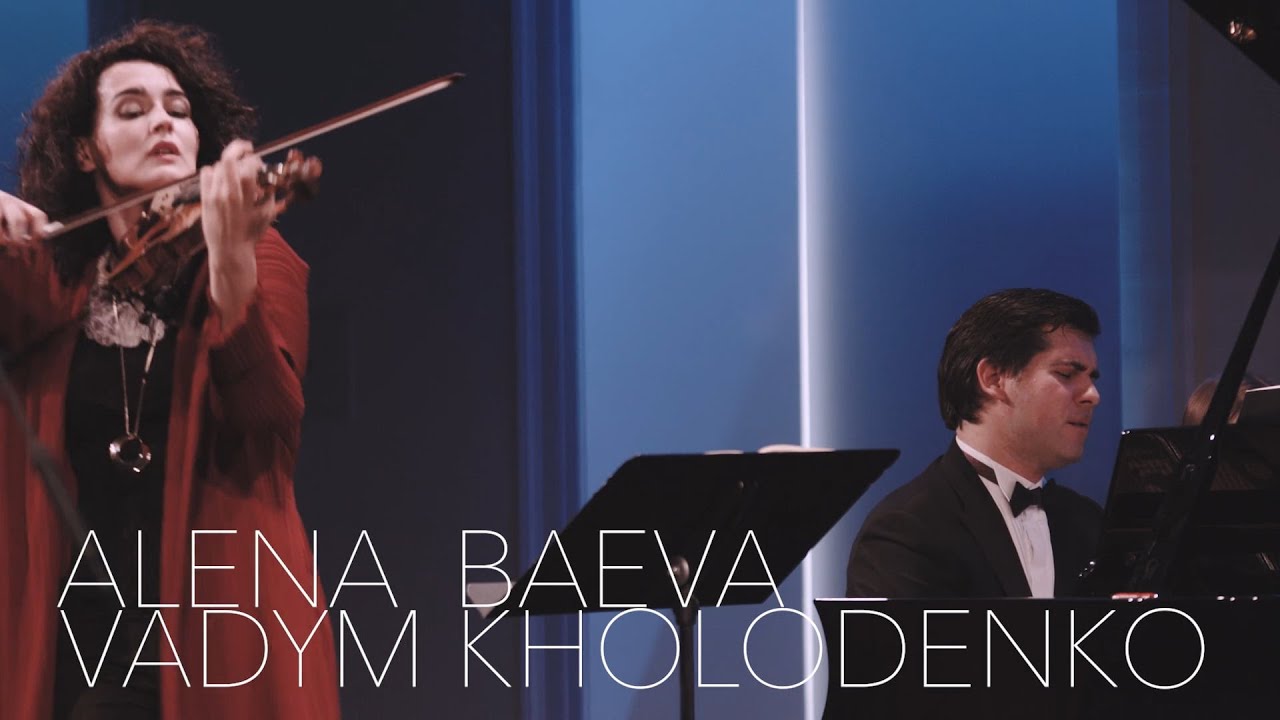 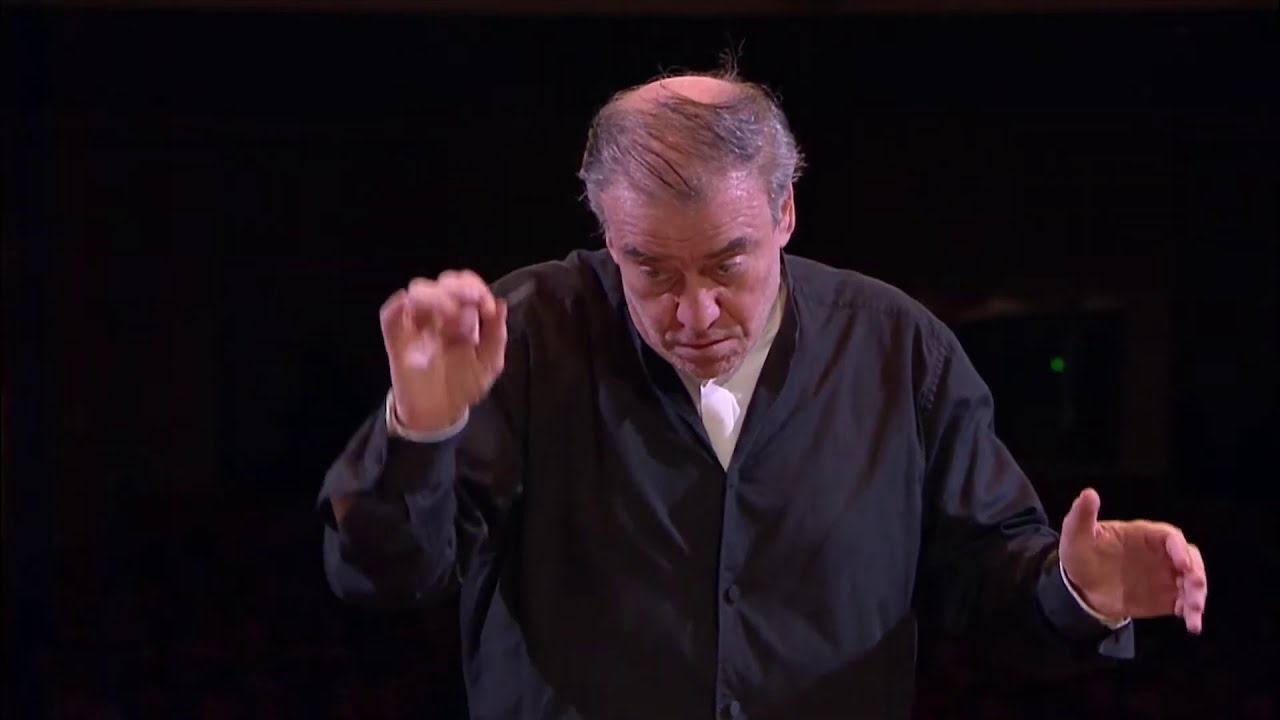 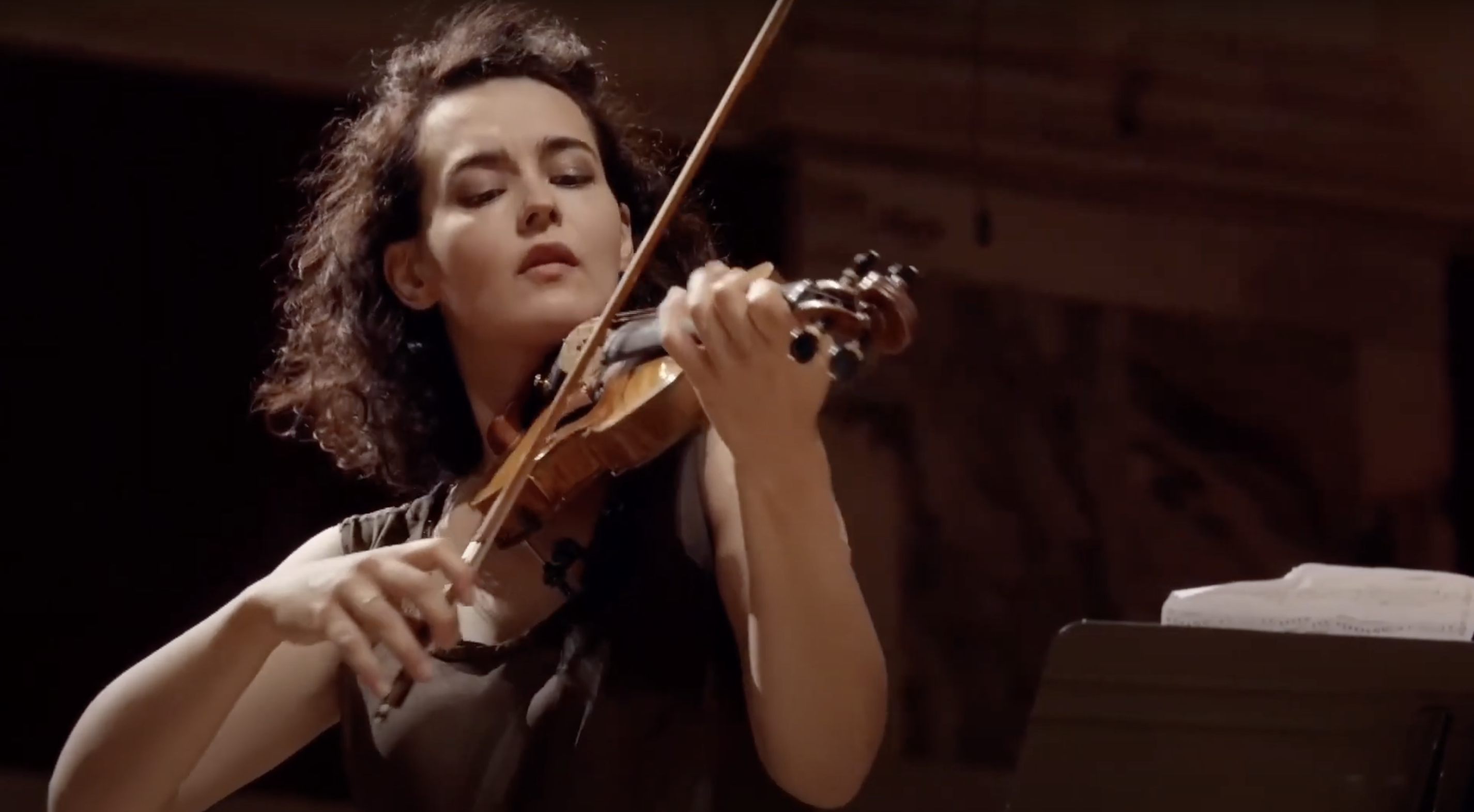 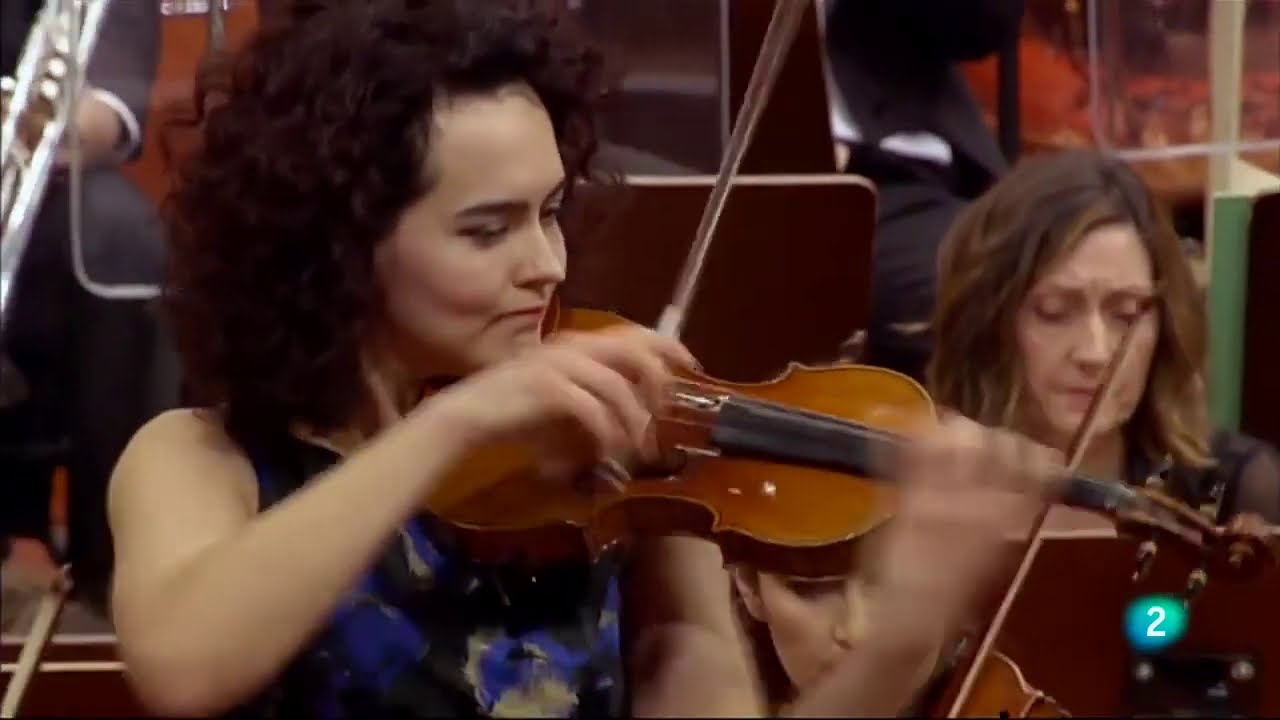 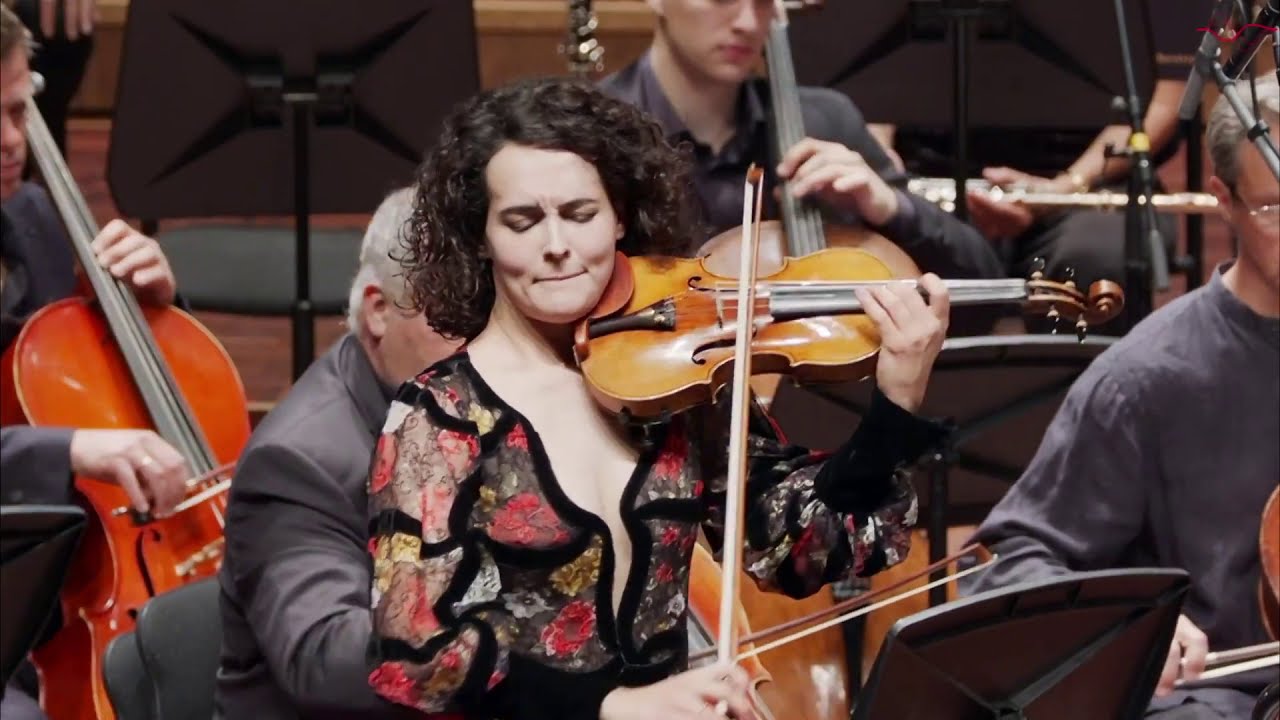 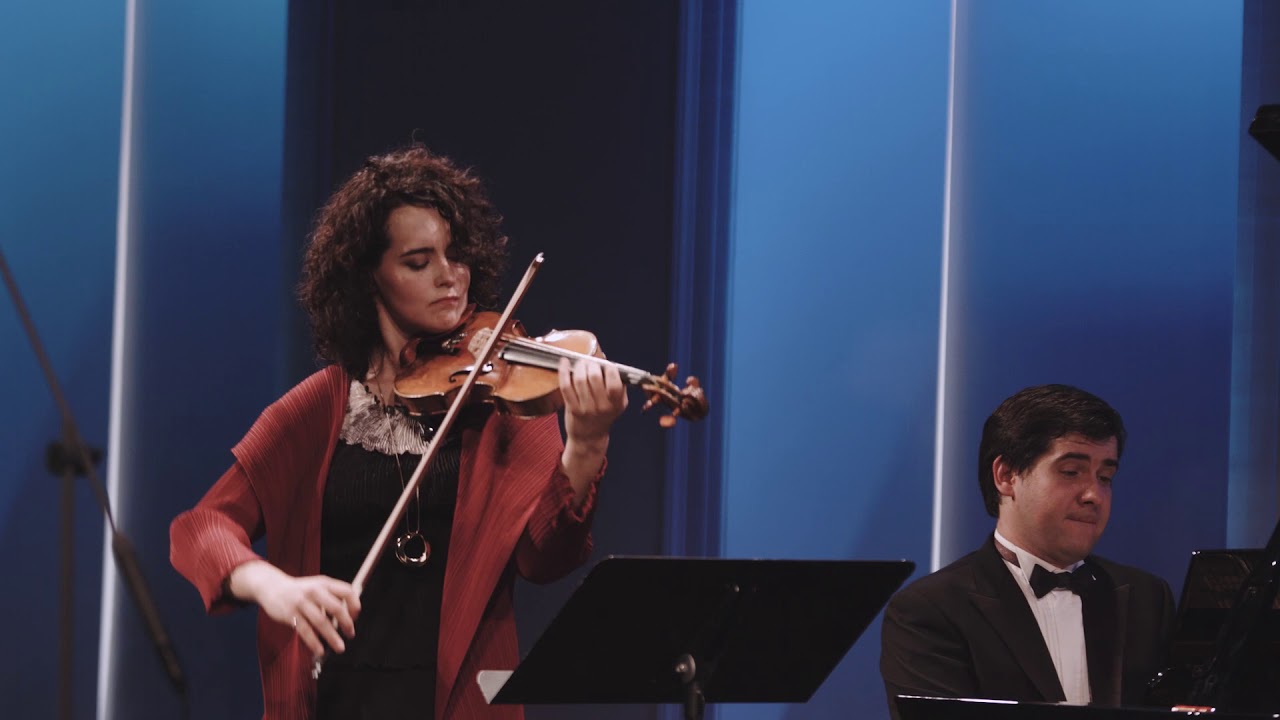 Described as “a magnetic presence” and “a constantly fascinating sound technician” (New York Classical Review), violinist Alena Baeva is considered one of the most exciting, versatile, and alluring soloists active on the world stage today.

She now enjoys a particularly strong artistic partnership with Paavo Järvi, with whom recent and future collaborations include performances with the Estonian Festival Orchestra, New York Philharmonic Orchestra, NHK Symphony Orchestra Tokyo, and the Tonhalle-Orchester Zürich.

Another such regular collaborative partnership is that with Vladimir Jurowski, with whom Baeva has both recorded and performed on numerous occasions, including with the London Philharmonic Orchestra, and Moscow’s Russian State Symphony Orchestra ‘Evgeny Svetlanov’.  Baeva also enjoys regular work with such world-renowned conductors as Teodor Currentzis, Charles Dutoit, Marek Janowski, and Tomáš Netopil.

Chamber music has always held a special place in Baeva’s musical life. She has the pleasure of collaborating with such esteemed artists as Martha Argerich, Yuri Bashmet, Steven Isserlis, Daishin Kashimoto, Misha Maisky, Lawrence Power, Julian Steckel, and Yeol-Eum Son.  Her regular sonata partner is the celebrated Ukrainian pianist Vadym Kholodenko (2013 Van Cliburn Winner), with whom she has established a dedicated musical partnership of more than a decade.

Baeva holds an already vast and rapidly expanding repertoire, including over forty violin concerti, and is a champion of lesser known works – with recent performances promoting such composers as Bacewicz, Karaev, and Karłowicz, alongside the more mainstream violin literature. She enjoys a lasting relationship with the Orchestra of the XVIII Century, performing and recording a variety of repertoire on period instruments.  Their 2022 recording release (Wieniawski Violin Concerto No.2) was crowned as ‘Recording of the Month’ by BBC Music Magazine, who declared it to be “essential listening”.

Baeva’s wider discography is extensive, and reflects the impressive breadth of her repertoire – with recordings ranging from Szymanowski (for DUX), to Debussy, Poulenc, and Prokofiev (for SIMC), and more.  Her Paris performance of Shostakovich Violin Concerto No.2 features as part of the Mariinsky Theatre/Valery Gergiev box-set DVD collection, released by Arthaus Musik in 2015.  In 2018, she made a recording of both the Karłowicz Violin Concerto with the Royal Philharmonic Orchestra (for NIFC), and of the Tchaikovsky Violin Concerto with London Philharmonic Orchestra/Vladimir Jurowski, to be released on the LPO Live label.  2020 saw the release of her recording of the Schumann Violin Concerto and the original (1844) version of the Mendelssohn Violin Concerto in E minor – released worldwide on Melodiya Records and receiving wide-spread critical acclaim.

Born in Russia to a musical family, Baeva took her first violin lessons at the age of five under renowned pedagogue Olga Danilova, before going on to study in Moscow with Professor Eduard Grach at the Central School of Music and the State Tchaikovsky Conservatoire. In addition to her formal education, she studied in France with Mstislav Rostropovich, in Switzerland with Seiji Ozawa, in Israel with Shlomo Mintz (at Keshet Eilon Music Center), and in Paris with Boris Garlitsky.  Aged 16, Baeva won the Grand Prix at the 12th International Henryk Wieniawski Competition (2001), as well as the Prize for Best Performance of a Contemporary Work.  Following this, she went on to take the Grand Prix at the Moscow International Niccolò Paganini Competition (2004), including a Special Prize allowing her to perform on the 1723 Wieniawski Stradivari for one year, and was awarded both the Gold Medal and the Audience Prize at the Sendai International Violin Competition (2007).

Alena Baeva plays on the “ex-William Kroll” Guarneri del Gesù of 1738 – on generous loan from an anonymous patron, with the kind assistance of J&A Beares.

Alena Baeva travels to Hong Kong next week for two performances (21 and 22 Oct) with Hong Kong...

Alena Baeva is in France this week for two highly anticipated performances with Orchestre National...

“Baeva charms – sensual and lyrical…. Her technique and tone polish every note and send it out to the audience like a lustrous gem.  She possesses awe-inspiring technique, and a tone that is soaring and entrancing.”

“The sheer musical brilliance of Alena Baeva’s collaboration with the Orchestra of the 18th Century makes their performance essential listening.”
BBC Music Magazine

“Thoroughly captivating … a showcase of commanding technique, brilliant clarity, and jam-packed with heart and soul”

“Utterly ravishing and full of melody, Alena Baeva, the young Russian violinist, immediately impressed with her tone. I can see why Järvi (among others) is a keen champion of her skills and musicianship – we shall certainly see and hear a lot more of this excellent young artist. Baeva had made her mark with great aplomb.”
Seen and Heard International

“A miracle – music-making as an expression of sheer love”

“Alena Baeva is a violinist of proven musicality and impeccable intonation…. In the cadenza [of the Britten Violin Concerto], she created one of the most attractive moments in concert history.  In a work full of connections, Baeva gave an entire articulatory lesson: you could not help but get carried away…”

“Exuberant – Alena Baeva’s interpretation is impassioned and passionate, inexorably leading to a standing ovation from the audience of the RAI Auditorium. She reveals her personal imprint through an ever brilliant and light sound, accompanied by an enviable variety in vibrato and impeccable technical mastery.”
L’Ape musicale

“The musical empathy between Baeva & Jurowski was evident, not just in tempos and moment-to-moment detail, but in the very character of the piece. There were muscularity and thrilling virtuosity aplenty, but there was also gentle, intimate playing, drawing the audience into passages with the emotional complexity of chamber music. […] In the second movement, Baeva became a delicate, distant voice, poetic and captivating. In the Finale she let rip – swaggering, heroic, and full of personality.”
The Strad

“Everything about the performance seemed to get under the skin of this very familiar work, giving [the Tchaikovsky Violin Concerto] more than a new lease of life. The first movement had poise and excitement in equal measure, with Alena Baeva demonstrating an exceptional evenness of tone across all the registers and an evident responsiveness to Vladimir Jurowski and the London Philharmonic Orchestra. The brief slow movement was given the most sensitive account, hushed and romantic in the most tasteful manner. The finale was everything you’d want it to be, thrillingly fast and technically sure footed, as well as having a true heart in the gentler passages. So, this was an undoubtedly a top-notch performance, making this masterpiece sound even more like one of the composer’s greatest works.”
Bachtrack

“Fine technique and imaginative phrasing…. In the Canzonetta, her beautiful violin tone and her lovely shaping of Tchaikovsky’s song-like melodies marked her out as an outstanding player, and her account of the Finale was not only strikingly virtuosic but had a compelling quality of joyous abandon.”
Seen and Heard International

“Soloist Alena Baeva had a glowing tone, with which she held sensual command… she formed the sovereign centre of the enchanted world of Szymanowski.”
NRC Handelsblad

“Baeva & Kholodenko constitute a communicative and brilliant duo, always putting virtuosity at the service of the musical work…”
Freiburger Nachrichten
“Baeva was a magnetic presence, and the sound of her instrument, the fullness of tone, and her marvelously precise intonation were admirable and beautiful in and of themselves. Her strength and fire made the [Bacewicz] concerto sound like a masterpiece.”
New York Classical Review

“Baeva can sing with the violin – a constantly fascinating sound technician, with the highest rhythmic versatility.”
Badische Zeitung

“Besides her striking stage presence, Baeva makes more sense of this thorny score than anyone else I can recall… approachable emotionally despite the starkness typical of late Shostakovich.”
Fanfare magazine

“Alena Baeva, was an expressive, sparkling counterpoint…very fine interplay, with close and responsive cooperation. I have never heard this violin concerto played with such fine nuances.”
Norrköping Symfoniorkester

“Baeva is an excellent violinist and wholeheartedly embraces the complexities of Shostakovich and plays the 2nd Violin Concerto with ease and authority.”
Past Daily
“Star soloist Alena Baeva, whose dark beautiful tone and intense sound colours cause the violin to sing and to soar.”
Tidningen Kulturen

Conductor: Valery Gergiev
Orchestra and Chorus of the Mariinsky Theatre

Released May 2009 on Sendai Cultual Foundation